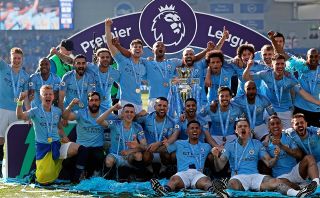 Manchester City could reportedly be facing fresh calls to be banned from the Champions League after recent meetings between investigators looking into the club.

According to the New York Times, talks were held about two weeks ago as investigators could now be preparing to finalise their report on City, who were just crowned Premier League champions yesterday.

The New York Times claims the investigating team are likely to call for a one-season ban from European competition for City, in what could be a huge blow for the club and their ambitious owners.

While Pep Guardiola’s side have been dominant domestically, they are yet to make progress in the Champions League and that will be a trophy the club are eager to add to their collection soon.

However, some potential alleged wrongdoings could affect their participation in the competition, with the New York Times report explaining how the club may have used their sponsorship dealings to get around Uefa’s Financial Fair Play rules.

City have previously denied any illegal activity, but if they are found guilty one imagines there’ll be a few Liverpool fans calling for them to be stripped of this season’s Premier League title – which they won by just a point against the Reds on the final day of the season.