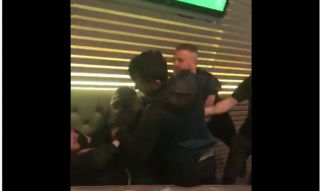 Some Liverpool fans embarrassed themselves after getting into a fight before the 3-0 defeat to Watford had even ended.

Watch the video below as some Reds fans clearly wound each other up about something as they struggled to handle their team’s first Premier League defeat of the season.

Liverpool fans fighting with each other after Watford defeat. Great viewing ?? pic.twitter.com/47ueMy7N88

Watford were worthy winners after a poor display from Jurgen Klopp’s side, but they remain comfortably ahead of Manchester City and surely heading for the title.

Still, I guess when you forget what losing feels like it’s that bit harder to handle…