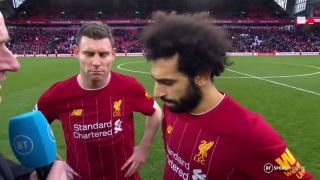 The Premier League could bring in half-time interviews and cameras inside dressing rooms to improve matchday coverage if football resumes behind closed doors this summer.

Clubs were presented with these ideas and other plans during Friday’s meeting about Project Restart, according to a report in the Times.

MORE: Montpellier ace Junior Sambia out of intensive care after fight against coronavirus

It would certainly be strange to see a large number of games going ahead in empty stadiums, with the lack of atmosphere bound to make for strange viewing.

Still, one imagines most fans would dearly love to have football to watch again in these difficult times, with entertainment surely needed to lift the mood of the nation, whilst increased numbers of televised games also giving people more of an incentive to stay at home as much as possible.

It would be interesting to get the added insight from more interviews and dressing room access, which should provide fans with a fresh angle on the game that they might not have had otherwise.

The Times report, however, that these plans still require government approval and it remains to be seen what kind of decision is taken on May 7th regarding the possible easing of the current lockdown in the UK.