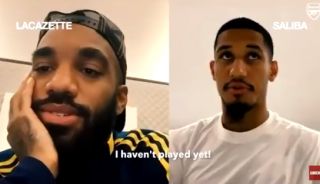 William Saliba was forced to address his lack of playing time at Arsenal in an awkward video from the club’s official YouTube channel.

Lacazette names Saliba as one, but the young defender responds by saying he doesn’t count because he hasn’t made an appearance for the Gunners yet.

It’s an awkward exchange, and it’s a reminder that Arsenal are bizarrely overlooking a superb talent in their squad.