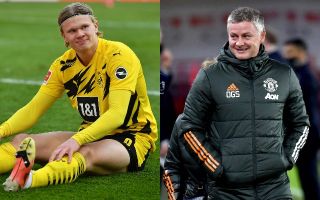 Manchester United may be set to boost their chances of winning the race for Borussia Dortmund striker Erling Haaland in this summer’s transfer window.

The Red Devils look set to hand manager Ole Gunnar Solskjaer a new contract, and this could be key to the club luring Haaland to Old Trafford.

Not only does Solskjaer have a known connection with his fellow Norwegian after they worked together at Molde, but it’s previously been reported that Haaland himself would like a move to a club with stability.

United have changed managers a few times since the retirement of Sir Alex Ferguson in 2013, but it looks like they’re ready to stick with Solskjaer.

MUFC fans will hope this can help them land Haaland ahead of other elite European clubs who are also thought to be in the running for his signature.

The likes of Manchester City, Chelsea, Real Madrid and Barcelona are also expected to try signing the 20-year-old in the near future.

It might be tricky for Man Utd to persuade Haaland to join them over all those other big names, but perhaps there’s now hope that Solskjaer’s situation can make all the difference.