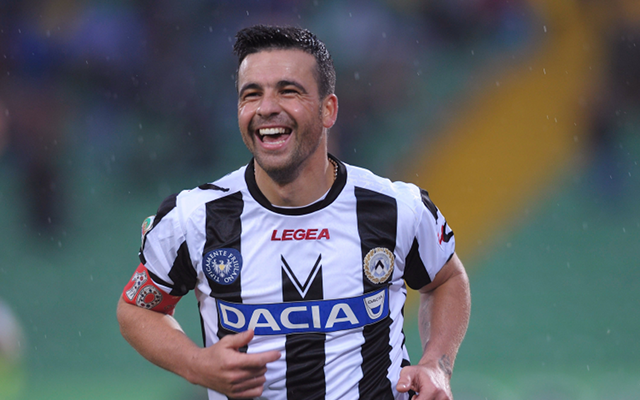 Prolific veteran the latest to emerge as Barca target.

Veteran Udinese striker Antonio Di Natale is the latest surprise name to emerge as a transfer target for Barcelona this January, CaughtOffside can reveal.

The Catalan giants have been linked with a surprise list of names in the last few days as it has become increasingly clear that manager Gerardo Martino wants to bring in an experienced out-and-out striker to the club when the transfer window re-opens.

The likes of Miroslav Klose, David Trezeguet and Roque Santa Cruz are supposedly Martino’s other main targets, as he looks to add some variety to an attack currently consisting entirely of versatile half-wingers/half-strikers such as Lionel Messi, Neymar, Alexis Sanchez and Pedro Rodriguez.

Although the signing of a penalty box poacher moves somewhat against the philosophy of the club under previous recent managers Pep Guardiola and Tito Vilanova, Martino believes his side are currently lacking an out-and-out goal-scorer, and hopes to sign a short-term option in that position.

Barcelona have had some success with this approach before, bringing in Henrik Larsson on a free transfer from Celtic in 2004. While many thought the Swede’s best years were behind him, he proved a useful player for the team in his two years at the Nou Camp, helping them to two La Liga titles and the Champions League in 2006.

Di Natale is another fine player who seems to continue getting better with age, and may be a stroke of genius by Martino if he can bring the Italian to the club this January.

The 35-year-old has been with Udinese since 2004, but it is only really since 2009 that the talented front-man has reached the best form of his career, with 117 goals in the last four years, compared to 73 strikes in the previous five seasons.

Despite his advancing years, the Italian international has a contract with the Serie A club that runs until 2016, and is widely expected to remain at the top level for a good few more years yet.

It is unclear just how much money Barcelona will be willing to part with to land this short-term target, while the likes of Klose could be cheaper as they run towards the end of their current contracts.

Udinese will certainly not want to part with a key player on the cheap, as Di Natale has started this campaign in fine form yet again with five goals in his first eleven games.

Di Natale has spent his entire career in Italy, and may be keen to take his one last opportunity to play for a true giant of European football.