Ten top players linked with transfers this summer, but haven’t moved yet…

The transfer window closes on Monday, and there are still a whole host of big-name, big-money players waiting on potential moves. Here are the top ten stars who could seal switches before time runs out: 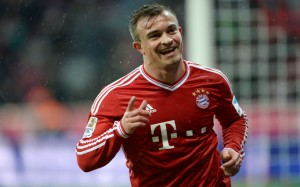 Eager to escape Bayern Munich, where he is sick of being a bit-part player. The Swiss international has attracted interest from Liverpool and Juventus, but has so far been unable to convince his German employers to sign-off on a sale.