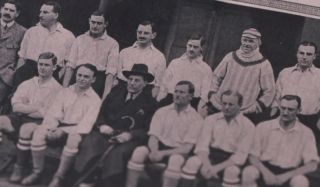 Players from a little known London club from the 7th tier of English football were greeted like kings as they rocked up to Brazil to play Corinthians in a World Cup stadium.

This is the story of Corinthian-Casuals FC, a merger of former club Corinthian FC and Casuals FC that took place in 1939 after a heartbreaking story that saw their players killed in the first world war.

A documentary on the players’ journey to Brazil, Brothers In Football, will air on ITV on November 21st, with Corinthian-Casuals given the dream opportunity to play in front of a crowd of 30,000 fans in the Arena Corinthians – a World Cup stadium in Brazil and home to the team their forefathers were the inspiration behind.

It’s a truly gripping watch and an important insight into a hugely important part of English football’s history.

As well as popularising the game in Brazil and all over the world, Corinthian FC notably inspired Real Madrid to play in white and to date have inflicted Manchester United’s heaviest ever defeat onto them by a scoreline of 11-3 back in 1904.

Corinthian-Casuals do well to keep the legend of the club going today, even if they play in front of comparatively modest crowds in their King George’s Field ground in Tolworth.

Their connection to Corinthians in Sao Paulo sees plenty of London-based Brazilians show up to their games, and they drew huge crowds to greet them at the airport as they arrived for their friendly match in Brazil in what was truly a touching moment.

Director, Chris Watney told CaughtOffside: “It took me six years to make and is the story of the long forgotten amateur club that originally popularised football all around the world, called Corinthian FC.

“I arranged to take the current team – that today play in the 7th tier of English football – back to Brazil to fulfil the fixtures that never happened 100 years before – playing against the two time FIFA World Champions, SC Corinthians Paulista in front of 30,000 and millions more on national TV. It was a quite amazing experience.

“It’s the story of the everyman amateur getting their chance to play superstars in a World Cup stadium… and all in tribute to their heroic forefathers who gave the world the beautiful game before making the ultimate sacrifice defending its freedom.”