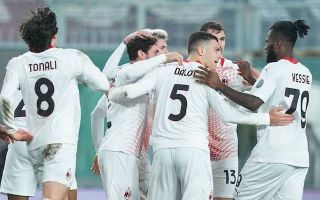 AC Milan have set a new Italian league record, according to OptaPaolo, despite drawing their last two Serie A games.

This season so far has been a tale of the resurgence of the Rossoneri, with the Zlatan Ibrahimovic led Italian giants leading the Scudetto race early on.

Having won eight and drawn two of their opening ten Serie A games, Milan have stumbled ever so slightly, with last night’s 2-2 draw with Genoa their second consecutive stalemate.

MORE: Real Madrid are a one-man team under Zinedine Zidane – these stats prove it

However, the club with such rich history, who have had such incredible teams in the past, achieved something last night that they, nor any other Italian club, have ever done before.

14 – AC Milan have scored at least 2 goals in 14 Serie A games in a row, an historical record in the italian top-flight (overtaken Torino in 1948, 13 games in a row). Overflow.#GenoaMilan

Though it’s hardly something to celebrate after back-to-back draws, it is definitive indication at the AC Milan of old are on their way back – the AC Milan that makes history, rather than reliving it.

Next up is a trip to Sassuolo on Sunday, where they will have a chance to both bounce back with a win and make it 15 games on the trot scoring two or more goals.