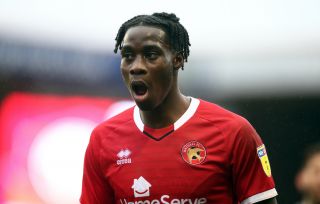 Huddersfield Town have put in an official bid of £250,000 for Walsall striker Elijah Adebayo.

Adebayo, 23, joined Walsall on a free transfer in 2019 after departing Fulham’s youth academy.

Since arriving at Walsall, the English forward has put in some fine performances which have included 21 direct goal contributions in 65 appearances, in all competitions.

The form of Walsall’s League Two striker has seen him emerge as a transfer target for Championship side Huddersfield.

CaughtOffside has recently obtained exclusive information from a source close to the player who has revealed that the Terriers have recently backed their interest up and have submitted a formal £250,000 bid for Adebayo.

It is not known at this stage whether or not Walsall will accept Huddersfield’s initial offer, but naturally the player is keen for the move to happen.

Huddersfield currently sit in 14th place in the Championship table and although in no immediate danger of falling into the relegation zone, they will be hopeful they can add some striking quality to their squad’s options.

The Terriers remain 11-points off the play-off places and will be desperately hoping they can make some ground over the duration of the season’s second-half, and Adebayo’s goalscoring threat will undoubtedly be a huge help.