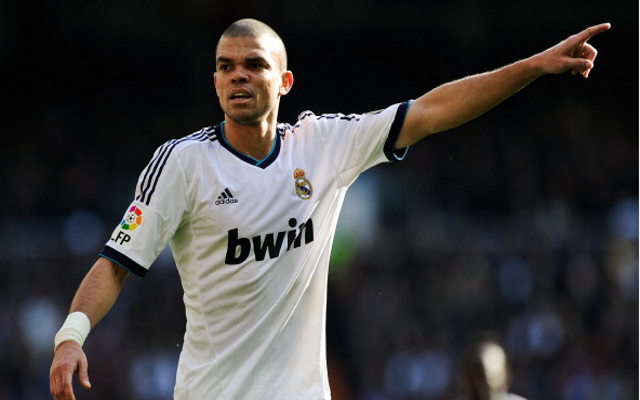 Real Madrid defender could be set for move to Etihad Stadium.

Manuel Pellegrini is set to make Real Madrid defender Pepe one of his top priorities once he arrives at Manchester City according to Spanish newspaper Marca.

The Malaga boss has been widely tipped to take over the vacant hotseat at the Etihad Stadium following the dismissal of Roberto Mancini last week.

The Chilean manager has reportedly already begun drawing up a shortlist of potential targets and is ready to make a big money move for Portuguese defender Pepe.

While Pepe has been an integral part of the Real Madrid team in recent years, the emergence of young French defender Raphael Varane has meant his place in the starting eleven is no longer as assured as it once was.

It is thought that Real Madrid officials would sanction a summer exit for Pepe should they receive a bid in excess of £20 million for the player.

It is not clear though whether Pepe will be responsive to the advances of Manchester City. The player is reportedly happy in the Spanish capital and is ready to fight for his place in the team.

Much depends on who comes in to replace Jose Mourinho this summer and how he sees Pepe fitting into the Real Madrid setup.