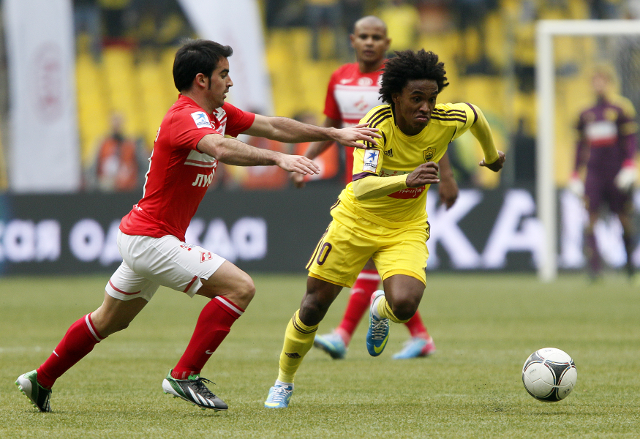 Anfield side close in on Brazilian international capture.

Check in to Liverpool vs Stoke City

Liverpool are closing in on a stunning move to sign Brazilian international Willian with the Anfield side looking likely to trump Tottenham and Man United in the race to sign the Anzhi Makhachkala star according to the Daily Mail.

Brendan Rodgers has been linked with a number of creative midfielders this summer with the likes of Henrikh Mhikhitaryan and Christian Eriksen being two reported targets but now it appears that the Northern Irishman could be set to welcome in impressive 25 year old Willian for a fee of £30m.

Anzhi Makhachkala are looking to offload a number of their high earners as they look to balance the books having seemingly ‘overly-invested’ in their squad and Liverpool are ready to fork out their second highest fee to bring in the former Shakhtar Donetsk man, with Andy Carroll being the club record signing at a whopping £35m.

Willian moved from the Ukraine to the Dagestan based club in January for a fee of around £32m but seems set to leave this summer having made just 15 appearances for the club.

Prior to his move to Anzhi Willian enjoyed great success with Shakhtar, securing four domestic titles as well as the UEFA Cup in 2009, racking up 37 goals in 222 appearances. The cultured attacker is used predominantly on the left wing but can also ply his trade in an advanced central midfield role.

Rodgers has brought in a number of summer signings but the outlay involved in bringing in Iago Aspas, Kolo Toure, Simon Mignolet and Luis Alberto has been more than covered by the sales of Jonjo Shelvey, Andy Carroll and Stewart Downing and as such the Merseyside club would appear to have the funds to mount a big money move for Willian, who could join national team colleague Lucas as Liverpool.