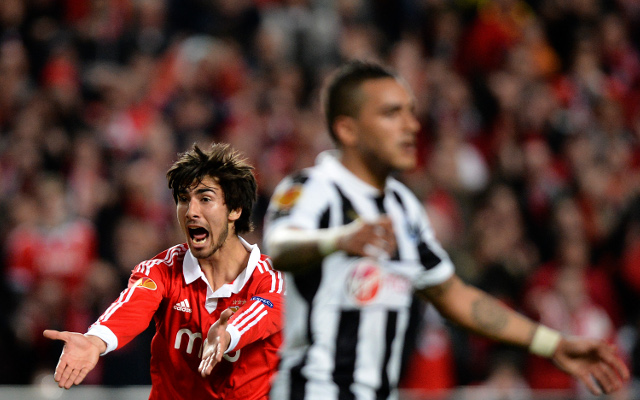 Manchester United and Manchester City both failed in bids to sign talented young Portuguese midfield Andre Gomes this summer, report Record, despite having made 18 million Euro offers for his services.

Gomes went on to join Valencia on loan from Portuguese champions Benfica, along with his manager and numerous teammates, and has a complex ownership situation, with new Valencia owner Peter Lim owning Gomes’ economic rights, along with those of exciting teammate Rodrigo.

Both players were transferred to Valencia in the summer, with Lim having turned down offers from United and City for the 21 year-old, in deals that are expected to become permanent next summer along with the club’s deal for striker Alvaro Negredo, who joined on a deadline day loan deal from City.

Despite only having made 14 Portuguese Primeira Liga appearances for Benfica, Gomes showed enough in his handful of appearances to suggest that he is a genuine star of the future – but it is Valencia who are set to reap the rewards from the player’s development.

Lim bought the La Liga giants this summer, but due to the protracted nature of the takeover, Valencia have only really been able to push through deals on a loan basis, with a view to purchasing them next summer once the takeover has been fully ratified.