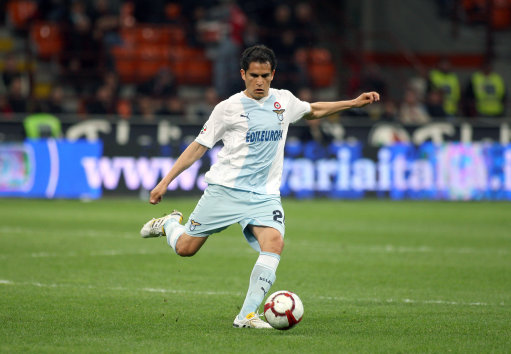 Arsenal manager Arsene Wenger is considering a surprise loan move for Lazio midfielder Cristian Ledesma on a loan move once the transfer window reopens, report the Express, after he lost both Jack Wilshere and Mikel Arteta to injury this week as a midfield crisis threatens to engulf the Emirates Stadium.

The move would be reminiscent of last season’s signing of Kim Kallstrom on a loan deal in the January transfer window, but Gunners fans will be hoping that neat and tidy central midfielder Ledesma is able to make more a positive impact in the Premier League than the Swedish international was last season.

The 32 year-old, who was born in Argentina but has one cap for Italy to his name, has been a steady if unspectacular campaigner in Serie A for Lazio for a number of seasons and would bring stability to the Arsenal midfield, although he does not exactly represent the marquee defensive midfield signing that fans will be expecting.

Having lost Wilshere to a long term ankle injury and Arteta for a number of weeks in recent days, bodies are certainly required in central midfield for Arsenal, so a loan move for Ledesma could represent a canny piece of business as long as it is backed up by quality additions.