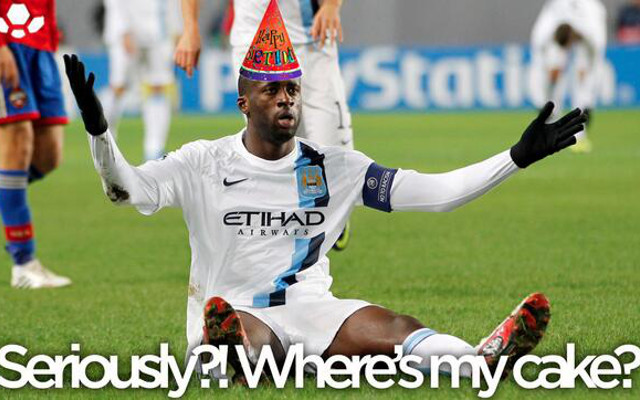 Yaya Toure turns 32 today, and Manchester City look to have avoided any repeat of last season’s drama by wishing the Ivorian a happy birthday on his special day – but there’s still no cake.

The Ivory Coast international is being linked with a move to Serie A outfit Inter Milan in the summer transfer window, but City still aren’t keen on upsetting the big man.

According to the Telegraph, he has been awarded a £720,000 Champions League bonus today, which should soften the blow over having to go another year without any cake from the club…

Last summer, the Manchester City midfielder, rather hilariously and embarrassingly, had a tantrum over the Sky Blues not making him a birthday cake – claiming that he felt under-appreciated by the club [via the Daily Mail]. Some could even say that Toure hasn’t been the same since the scandal…

As a result of his sulk, the social media team over at the Citizens ensured that their first job of the morning was to wish the midfield powerhouse well on his birthday.

However, the absence of a cake led Twitter users to show that they hadn’t forgotten…

Happy birthday to @YayaToure I guess this time around you would happy with ur birthday cake pic.twitter.com/8tKAtAcaHu

BREAKING: Yaya Toure has slapped in a transfer request after City officials failed to put a cherry on top of his 32nd birthday cake.