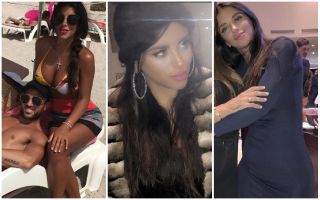 The season’s not yet over for Chelsea midfielder Cesc Fabregas, but he’s taken his opportunity to marry long-time partner Daniella Semaan this week.

With the FA Cup final coming up this weekend against Manchester United, the Spanish international will be back to work with Antonio Conte and his squad as they look to lift the trophy to end a disappointing campaign on a high note.

In fairness to him, with the World Cup starting next month, his summer is pretty busy and so in terms of wedding dates, it would have been difficult for him to organise something unless it was later in the summer between the end of the tournament and the start of the new domestic campaign.

Evidently, Fabregas and Semaan couldn’t wait that long, as they tied the knot this week, as seen in the images below posted by the beautiful bride.

Clearly, the Chelsea ace has done well for himself and he’ll likely now be flying out his better half and children to Russia next month to watch him in action for Spain.

Semaan, 42, joked in her post below that this wedding could be ‘maybe the one before last’ having been previously married, but Fabregas will undoubtedly be hoping that it’s a happily ever after as he will now have to quickly switch his focus back to football and away from his gorgeous bride.

The last one I promise or maybe the one before last ?? thank you @pamelamansourmehanna

Just married to this handsome man that I adore ?? thank you @pamelamansourmehanna For making all so magical and thank you @bassamfattouh For making me look Nice on this beautiful day and thank you @parazarme And mostly @rosa_clara For this gorgeous dress and @signature_bespoke for this stunning tuxedoes and @Georgeshobeika for dressing @mariataktouk ????????

Another great show from @rosa_clara? another stunning collection ? hair by @vanitasespai

Thank you for this beautiful earings @paolobongia ???

My handsome man ?Throwing it back to those 12 hours that passed like 12 minutes ?? ?