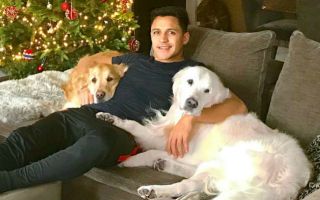 Manchester United defender Chris Smalling has tweeted a picture of himself with his dogs in an effort to warn about the risks of leaving the beloved pets in hot cars.

It’s been a scorching summer in the UK this year and Smalling appears to be tweeting this message in support of an animal welfare charity, which is nice.

Of course, the England international’s Red Devils team-mate Alexis Sanchez is well known for his love for dogs Atom and Humber, so let’s hope he took notice of this important tweet.

The Chilean forward can regularly be seen posing with his two dogs on social media, and the pair have really become quite iconic online.

So much so, that Sanchez actually set up an Instagram account of their own for the duo, which has 190k followers at the time of writing.

You can visit the page here. Go on, we insist. It really is a treat for dog lovers everywhere.

Smalling’s dogs don’t look too bad themselves, so perhaps an Instagram account is coming for them soon as well…

You wouldn't leave a child in a hot car so don't do it to a dog!

Miley and Ruben with their best poses in this photo ?? @PETAUK pic.twitter.com/biUnKrjE88