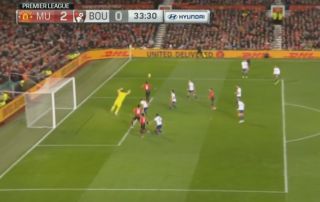 Paul Pogba scored his second goal of the game for Man United in their match vs Bournemouth this afternoon, as the Frenchman doubled his side’s lead with a thumping header.

Having already put the home side 1-0 up earlier in the half, Pogba scored his and United’s second towards the end of the half, as he latched onto a cross from Ander Herrera to thump his header home.

It was a fine leap and finish from Pogba, who now has the entirety of the second half to bag his first ever hat-trick for the club.

Now that’s a sight we’re sure Jose Mourinho would not want to see!

Pogba goal my guy is on fire #MUFC pic.twitter.com/prEsvfnDgY