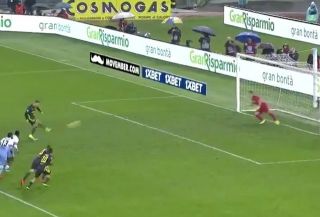 After missing his last penalty against Chievo, the pressure was on Cristiano Ronaldo as he stepped up for Juventus at Lazio on Sunday night.

The Bianconeri fell behind at the Stadio Olimpico through an Emre Can own goal, but efforts from Joao Cancelo and Ronaldo turned things around and moved them 11 points clear at the top of the Serie A table.

SEE MORE: What Allegri said when asked about possibility of Pogba return to Juventus

Despite missing his last penalty in the win over Chievo last Monday, it didn’t put Ronaldo off taking the next one as he stepped up in the 88th minute to rifle home his 14th league goal of the season in just 20 outings, as seen in the video below.

There would undoubtedly have been plenty of pressure on his shoulders to convert in what was a poor performance overall from the reigning Italian champions, but their talisman stepped up when he was needed and made no mistake.

It was a cruel blow for Lazio who will feel as though they deserved to take something from the game, but instead it turned out to be a potentially key setback in the race for the top four with AC Milan holding on to fourth spot after results elsewhere on Sunday.

That will matter little to Ronaldo though, who showed his class and his nerve to settle things in Rome with a match-winning penalty.

Penalty Juventus, Ronaldo fires it home! #Juve come from a goal down to claim all three points against Lazio in #SerieA ????#CR7 pic.twitter.com/jNquXiuDpK