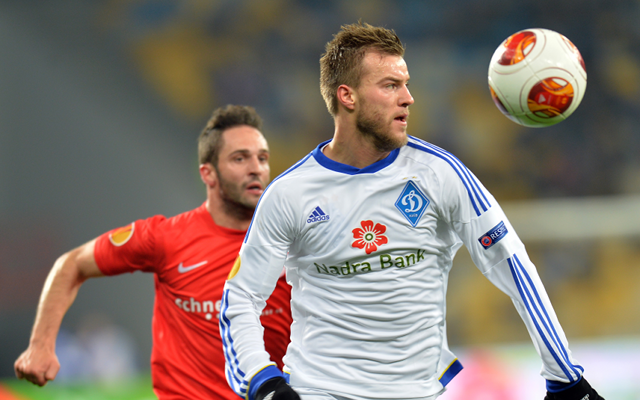 Liverpool are set to renew their interest in Dynamo Kiev’s Ukranian winger Andriy Yarmolenko, despite the Daily Star claiming that Chelsea are in talks with the player over a move to Stamford Bridge.

The Mirror are reporting that the Anfield club will next target a defender and a wide player to strengthen their group, with Southampton defender Dejan Lovren, as well as Yarmolenko, near the top of their list.

Kiev are thought to be demanding in the region of £15 million for one of their prize assets, a fee that could deter the Reds, who have already spent upwards of £30 million this summer on Lallana, Rickie Lambert and Emre Can. The reports suggest that Rodgers will watch the progress of Chelsea’s negotiations and remain ready to swoop.

The 24-year-old, who has scored 15 goals in 39 games for his country, netted 20 times for his club in all competitions last season, attracting the interest of a duo of Premier League giants.

Liverpool narrowly missed out on the signing of Yarmolenko’s international teammate Yevhen Konoplyanka on deadline day in January, as well as Basel forward Mohamed Salah, who instead joined Chelsea, and are determined to add some width to their squad this summer.