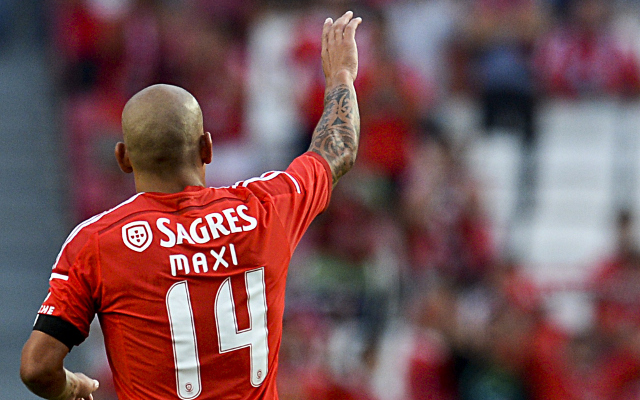 Pereira could join the Gunners over the Reds.

Benfica right-back Maxi Pereira will be available on a free transfer next summer and now Arsenal have joined Liverpool in the race to sign the Uruguayan, according to the Daily Express.

The Reds had made Pereira one of their key targets as they search for a replacement for Glen Johnson – who is also out of contract at the end of the season.

Due to a drop in form, a spate of injuries and his high wages, it looks unlikely that the Merseyside outfit will not offer Johnson a new deal and will need to find an alternative.

Pereira is an attractive option with his experience in the Uruguay national team and in top flight European football with the Portuguese champions.

Brendan Rodgers views the more experienced 30-year-old as the ideal mentor for Atletico Madrid loanee Javier Manquillo, who will be at Anfield until at least 2016.

However, opposite number Arsene Wenger has also sensed an opportunity and may well look to beat the Merseysiders to the signing of Pereira.

The Frenchman also has some issues at right-back, despite the fact Calum Chambers and Mathieu Debuchy were signed over the summer for a combined cost of £28m.

This is because Chambers has clearly developed into a much better central defender and whilst Debuchy has looked good, the France international is currently suffering from a long-term injury.