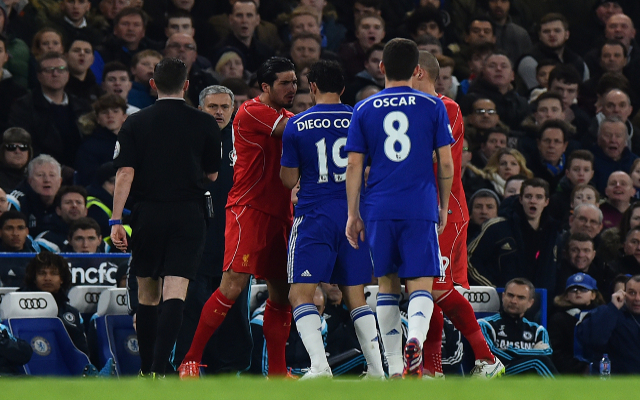 Chelsea forward Diego Costa has been hit with an FA charge of ‘violent conduct’ following an altercation between the Spanish international and Liverpool’s Emre Can.

The FA have confirmed that the incident was not seen by officials at the time and that the 26 year old Blues star has until 6pm on Thursday to respond to the charge.

The former Atletico Madrid man appeared to stamp on Can’s outstretched leg following a coming together of the two players, which resulted in a minor melee.

Costa was involved in a similar stamping incident with Liverpool defender Martin Srktel though the FA did not deem that incident worthy of censure.

Jose Mourinho may well have to do without Costa for a game or two and as such will hope back-up forwards Didier Drogba and Loic Remy can minimise the impact such a loss could have on the Chelsea cause.

Below are videos of the two incidents in question.