AC Milan’s Curva Sud is one of the world’s most iconic stands.

It is perhaps a sign of the times that the home of their most fanatical fans was virtually empty just thirty minutes ahead of a vital Coppa Italia quarter final against Lazio.

Milan have struggled throughout 2014 and 2015. Last season they finished a distant 8th with only fractional more than half the points of eventual champions Juventus. This season they are 11th, 23 points behind leaders Juventus.

Lazio beat Milan 1-0 in the game itself, with Lucas Biglia scoring the winner from the spot in the first half. Lazio played the entire second half with 10 men after the sending off of Lorik Cana, but Milan couldn’t capitalise.

It is Lazio’s second win over Milan this week after they won 3-1 in the Serie A at the weekend.

Here is the same stand in happier times: 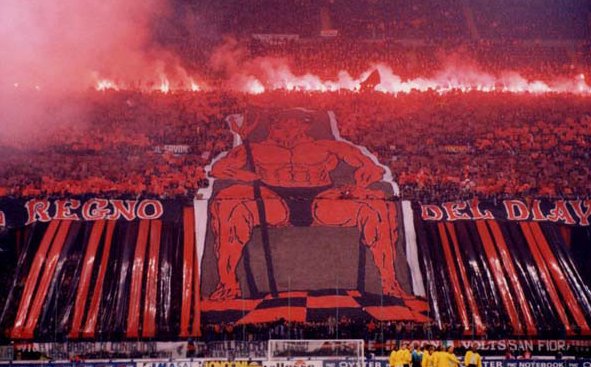