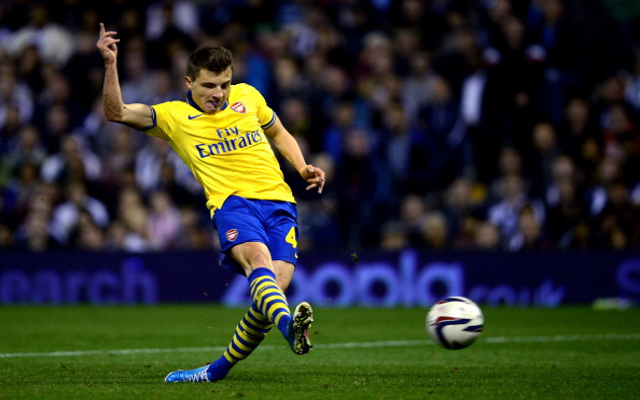 SEE MORE:
(Video) Bas Dost: The Striker Arsenal Should Sign This Summer
Is Arsenal’s Mesut Ozil Facing Unfair Criticism? These Stats Suggest So…
Arsenal Pair Set For Return Against QPR Ahead Of Crucial Fortnight For Gunners

The young German who joined the Gunners in 2012 from Borussia Dortmund, arrived at the club billed as a potential future star but failed to make the grade and was shipped out last summer.

However, despite his short time at the Emirates, Eisfeld was full of praise for the club and manager saying there was so much for a young player to learn.

“Arsenal stands for a certain kind of football. Arsene Wenger has formed the club, he emphasises the beauty of the game,” said Eisfeld to Goal.com

“If you play a long ball in training you would get some words – even from the other players. He [Wenger] is very quiet, doesn’t talk much. During training sessions he rarely corrects something.

“Only after having finished he will talk to you, two or three sentences. And that is what you remember for a long time. In general, he is a person everybody respects, absolutely.”

Eisfeld made just a handful appearances with Arsenal, and managed only one goal in the League Cup during his time there.