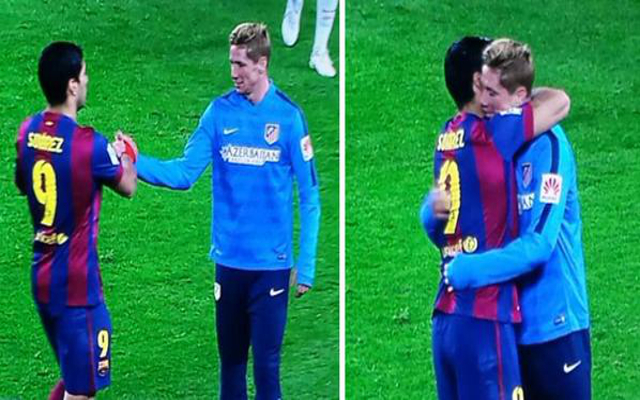 On Sunday, Anfield will get a glimpse of what might have been when former heroes Fernando Torres and Luis Suarez forge a strike partnership.

The pair are set to feature for Steven Gerrard’s XI against Jamie Carragher’s XI in an All-Star charity match and will finally get a chance to play together in front of the Anfield faithful.

Despite only being at the club together for two days in January 2011 the Spaniard revealed they have remained in contact ever since briefly crossing paths and is looking forward to linking up with the Uruguayan striker:

“Luis is a good friend – we have a good relationship and good friendship. We were sitting together for two days at Melwood when I was leaving and he was coming. We made good friends and we are still in touch now,” Torres told Liverpool’s official club website.

“It will be great to play up front with him, especially with Stevie G behind us.” he added

In their separate spells at the club, both warmed the hearts of Liverpool fans, Torres hit 81 goals in 142 appearances, while Suarez struck 31 goals in 33 league games last season as the Reds came agonisingly close to winning a first league title in over two decades.

Torres has also been speaking about the reception that he could receive at his former club, on his previous returns to Anfield with Chelsea he has been meet with boos, with some fans refusing to forgiving him for joining the Blues in a £50m deal, but the Atletico Madrid striker is hoping for a warm welcome on Sunday:

“It is going to be amazing going back; hopefully the reception will be better than the one I had when I went with Chelsea. But it doesn’t matter what happens really.” he said