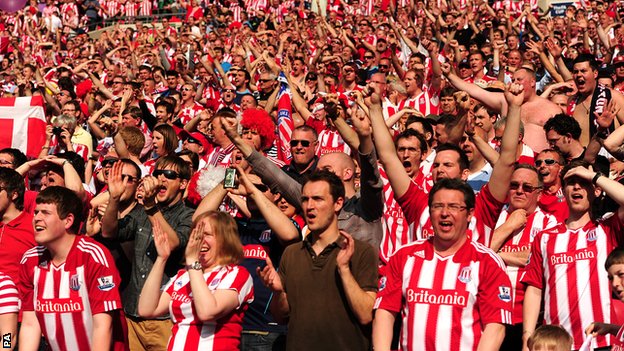 Spurs have lost 3-0 to Stoke in the Premier League on Saturday afternoon, ending their faint hopes of catching the top four and grabbing a surprise place in the Champions League. They are now seven points behind Manchester United with only two games to go.

Going into the game, Spurs knew that a win was vital if they wanted to a avoid an early-season Europa League qualifying round – the team that finishes fifth will go straight into the group stage but the team in sixth must play a qualifier.

Stoke made two changes to the side which lost 2-0 against Swansea in their last outing, as Geoff Cameron and Marc Muniesa replaced Phil Bardsley and Marc Wilson in the back four. Spurs made a single change from the team which lost 1-0 to Manchester City in their last game, as full-back Danny Rose – who had a groin issue – was replaced by Vlad Chiriches.

The visitors had all the early running, as Hugo Lloris tipped a long range hit by Marc Muniesa over the bar and they picked up three corners in the first five minutes.

Spurs struggled to find any momentum. It was hardly surprising – this was their 55th game of the season in all competitions and they look like a side that can’t wait for the end of the season.

The hosts got their reward for all their early pressure in the 21st minute. Steven N’Zonzi supplied the cross, and a mistimed Jan Vertonghen header allowed Charlie Adam to nod home at the back post.

Spurs immediately responded by hitting the bar, but the lead was doubled just ten minutes later when a shocking mix up between Hugo Lloris and Eric Dier let Steven N’Zonzi sweep the ball into an empty net.

Spurs awful day went from bad to worse in the 51st minute when defender Vlad Chiriches was sent off for a second yellow. He mis-controlled Lloris’ pass, forcing himself into tugging down Mame Biram Diouf down from behind.

With time ticking down Stoke managed to add a humiliating third. This time Mame Biram Diouf was the scorer, as he beat the Spurs defence to tuck in Marko Arnautovic’s cross at the near post.

The result means Spurs stay sixth, with Southampton in seventh losing to relegation-threatened Leicester City. Stoke move up to ninth and are just three points behind Swansea in eighth.

There are now only two games remaining for both sides. Stoke travel to Burnley next week then host Liverpool on the final day, while Spurs are at home to Hull City in their next game before a trip to Everton to see their season out.