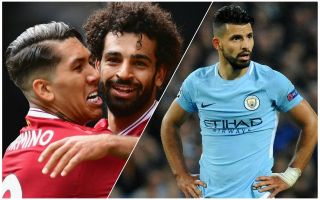 Liverpool fans are not a happy bunch as they fume at one of their stars of the season being overlooked in favour of Manchester City striker Sergio Aguero in the latest edition of the PFA Team of the Year.

No, don’t worry, it’s not Mohamed Salah. The Egypt international is up front alongside Aguero and Tottenham hit-man Harry Kane, but there’s no place for Roberto Firmino.

In fairness, Aguero has won the Premier League title and scored more goals than Firmino, but that hasn’t stopped Liverpool supporters complaining on Twitter this morning.

The Brazil international has been an underrated star of the Reds’ campaign, with his quality and work rate up front more than making up for his slightly reduced goal threat in comparison to other leading strikers.

Some Liverpool fans are also unhappy that Chelsea’s Marcos Alonso – far from an outstanding performer this season – has also got in ahead of Andrew Robertson, who has been a revelation at Anfield, though in fairness he didn’t start playing regularly until mainly the second half of the campaign…

Firmino should been in there instead of Aguero and Tarowski should be in Instead of otamendi, and for Alonso Robertson

Firmino should be in there instead of Aguero. And Robertson would have been selected if he'd had a full season. https://t.co/RSTVaafk0M

What about Firmino and Sané! https://t.co/2DbMkJnqHW

Bias aside, Firmino should be in this rather than Aguero https://t.co/iGFprC5Gpg

Aguero in the team of the season over Bobby Firmino?

Baffled that none of Robertson, Firmino, Jesus or Sterling aren't in the TotY. And wtf is Alonso doing in it?