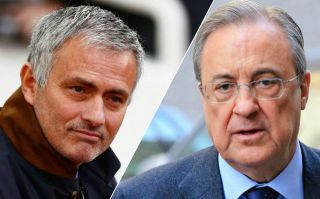 Real Madrid have reportedly set up an urgent meeting with Raphael Varane to discuss his future after finding out of transfer approaches from Manchester United.

According to Don Balon, Red Devils boss Jose Mourinho has been personally contacting Varane with a tempting offer to bring him to Old Trafford this summer.

The France international would undoubtedly make a great addition for this United side considering their current shortage of genuine world class centre-backs.

Varane shone under Mourinho when he was Real Madrid manager and a reunion could be the ideal next step for him in his career, though Don Balon suggest Real are desperate to keep hold of him.

The Spanish outlet suggests, however, that the 25-year-old has moved to assure the club that he’s yet to make a decision on his future and will make up his mind after the Champions League final.

Raphael Varane to Manchester United transfer could be on this summer

United fans will hope they can get this deal done, with reinforcements at the back surely needed if the club is to stand any chance of catching Manchester City next season.

Despite sitting second in the league at the moment, Mourinho’s side haven’t really been at all close to City for much of this campaign and it looks like further investment will be needed to close the gap.