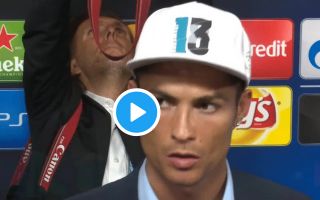 Los Blancos claimed their third consecutive European crown to make history this weekend, while it was also their fourth in the last five years as this group has ultimately now been era defining with their exploits on the biggest club stage.

Ronaldo has been a major part of that run of success, setting new records along the way and firmly establishing himself as a club icon with his goalscoring feats and trophy collection.

However, as noted by BBC Sport, he rather bizarrely opted to raise question marks over his future straight after victory in Kiev and hinted that he will deliver a definitive answer on his club future in the next few days to weeks.

It will have to be soon as he reports for duty with Portugal ahead of the World Cup next week, and he surely doesn’t intend on making supporters wait for clarification until after the tournament.

Speaking in the mixed zone in Kiev a little later after making his initial comments, as seen in the video below, Ronaldo sounded a little apologetic towards the supporters over the timing of his comments as it did take away some of the shine of their achievement.

Nevertheless, he doubled down on his suggestion that his future at Real Madrid could be in doubt, and so it remains to be seen what the source of the issue is and whether it genuinely is big enough to force him to contemplate an exit from the Bernabeu…