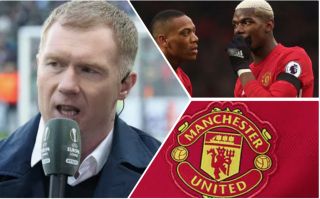 As per the Sun, who are re-reporting an interview Scholes did with BeIN Sports, Scholes was very critical of the Frenchman, stating that “Paul needs to find consistency. You look at his game, he can be brilliant one week, not so good the next week.”

The United icon also added that Pogba is “a player that you get a performance out of him one in every three or four games. And if you’re going to win leagues it’s just not enough.”

"He needs to use his brain a little bit more to become a top footballer."

Scholes has a very good point on Pogba, as the French international, despite his World Cup heroics in Russia this summer, has failed to make his mark with United since joining in 2016.

The midfielder has only managed to bag a handful of goals since joining from Juventus two summers ago, with a lot of United fans’ patience with the player running thin.

Pogba showed exactly what he’s capable of with France this summer, and there’s no reason why he can’t replicate this form at United under Mourinho.

If Pogba does manage to play similarly to how he did with France at the World Cup, it’ll give United a huge boost going into this season.

And who knows, with a bit of luck and consistency from the Frenchman, United may just have it in them to pip Man City to the title in May…