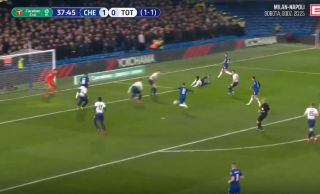 Chelsea star Eden Hazard has finished off a flowing team move that he was heavily involved in in the build-up to make it 2-0 against Tottenham.

This has been a fine first half from the Blues, who are now 2-1 up on aggregate, turning things around since their 1-0 loss against Spurs at Wembley in the first leg of this Carabao Cup semi-final tie.

Watch the Hazard goal video below as the Belgium international finishes with aplomb after being somehow left unmarked in the penalty area.

Not Tottenham’s finest hour – can they now get back into it themselves after this early setback?