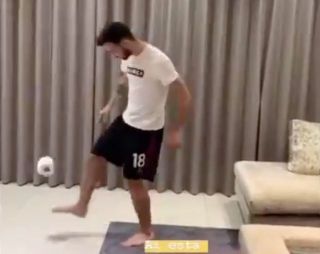 It’s been a great month or two for Man Utd star Bruno Fernandes, and he continues to win despite the suspension of football fixtures.

The 25-year-old joined the Red Devils in January and has already bagged three goals and four assists in just nine appearances across all competitions.

He was rewarded by being named Premier League player of the month for February, and he’ll hope to pick up from where he left off if or when the remaining fixtures are rescheduled after all the postponements due to the coronavirus outbreak crisis.

However, that hasn’t stopped Fernandes from delighting the Man Utd faithful, as he took on the Stay At Home Challenge on Monday, and as seen in the video below, he decided to show off his skills by doing keepy-uppies with a toilet paper roll.

Some were keen to point out that he was wearing his Man Utd shorts while doing so, further endearing himself to the United faithful, as sports stars look to keep themselves, and their followers, entertained on social media while the games are put on hold.

Bruno Fernandes takes on the #StayAtHomeChallenge in his United shorts ? pic.twitter.com/eecFFP1qSS