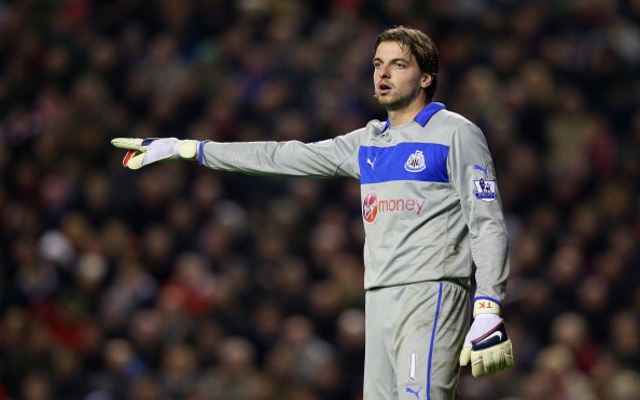 Newcastle goalkeeper Tim Krul is a target for Serie A duo Roma and AC Milan.

Roma have joined the race for Newcastle United goalkeeper Tim Krul as their current shot-stopper Maarten Stekelenburg could join Fulham, according to the Daily Mail.

Krul is also a target for Roma’s Serie A rivals AC Milan after an impressive couple of seasons in the Premier League with Alan Pardew’s side.

However, with Newcastle facing a relegation battle this season, it is thought that they might struggle to hold on to some of their star players, even if they do manage to avoid the drop.

Krul is valued at around £15million and has been linked with Arsenal in the past, but the strongest interest seems to be coming from Italy at the moment, with Roma in particular looking to replace their current goalkeeper.

Stekelenburg has found himself out of the first-team picture at the Stadio Olimpico, and reportedly came close to joining Fulham in the January transfer window, although a move never materialised.

But it seems that Fulham boss Martin Jol will renew his interest in the Dutchman this summer, as he looks for a long-term replacement for veteran ‘keeper Mark Schwarzer. If the Cottagers are successful in bringing in Stekelenburg, it would almost certainly push through a deal for Krul to move to Rome.