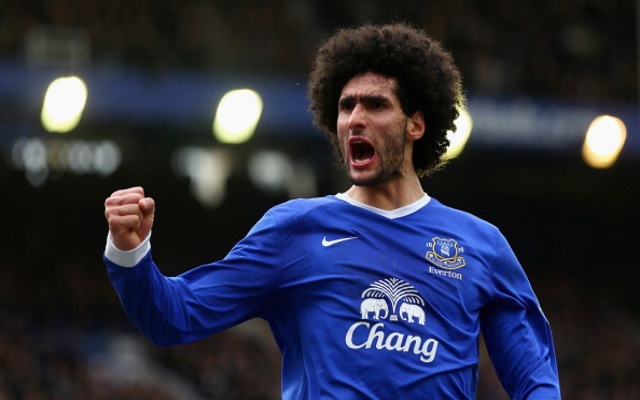 Everton midfielder Marouane Fellaini is set to snub Arsenal and hold out for a move to Manchester United according to the London Evening Standard.

The Belgian midfielder is tipped to leave Goodison Park this summer after  a number of impressive seasons for the club.

Fellaini has previously hinted that he would like to play at a higher level and, with his former manager David Moyes having left to take charge at United, could feel this summer is the right time to make a move.

Fellaini knows he will have no shortage of suitors should he decide to leave Everton. Arsenal are known to be in the market for a midfielder and are thought to be keeping tabs on Fellaini’s situation.

Chelsea are also thought to have been interested but it appears that United are in pole position to secure his signature.

United are currently exploring the possibility of signing Barcelona’s Cesc Fabregas, but with the Spanish midfielder reportedly keen to stay at the Nou Camp, it is thought that United could switch their focus to Fellaini sooner rather than later.

Everton would love to keep hold of Fellaini, with new boss Roberto Martinez seeing him as an integral part of the saquad, but they could be powerless to keep hold of him should any club meet his £23.5 million minimum fee release clause.