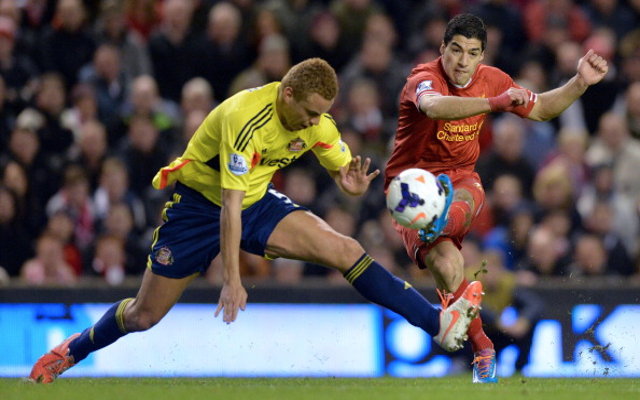 Bernabeu side to make mammoth offer for Anfield ace.

Real Madrid will step-up efforts to sign Liverpool striker Luis Suarez with the Bernabeu side readying a massive bid for the in-form goal machine.

CaughtOffside understands that Carlo Ancelotti wishes to bring in the Uruguayan to act as the spearhead of an attacking trio that would include Cristiano Ronaldo and Gareth Bale in wide roles and the Italian has been given the finances to make a major offer for the Anfield star.

Real Madrid will offer £70m as well as the choice of two potential players in a part-exchange deal.

Ancelotti is ready to include full-back Fabio Coentrao or midfielder Isco into the bargain, an offer that may be tough for Brendan Rodgers to ignore.

Suarez has only recently signed a lucrative new Liverpool contract though it is believed that the deal includes a release clause that Real Madrid may attempt to trigger though will open with this hugely attractive offer.

Real Madrid’s real hope of securing such a deal is if an official offer for his services leads to Suarez himself putting in a transfer request.

The former Ajax man has been in outstanding form this season, scoring 28 goals in Premier League action and his partnership with Daniel Sturridge has put Liverpool in a strong position to not only secure a coveted Champions League berth but has led to the Merseyside club mounting a genuine title challenge.

The allure of a move to Real Madrid may prove tempting for Suarez though there is a sense that the prolific forward is very much enjoying life at Liverpool at present and a chance to represent the club at Champions League level could entice the 27 year old into remaining at the club.

The financial ramifications of reaching the top table of European football could also mean Liverpool can resist stellar offers for Suarez, who is clearly the club’s most pivotal performer.

Real Madrid boss Ancelotti is keen to bring in Suarez as he feels he would be a better fit for his attacking plans though will still look to retain the services of Karim Benzema as a back-up option.

Liverpool paid Ajax £22.8m to sign Luis Suarez in January 2011 and he has gone on to become a massive success, scoring 79 goals in 126 appearances.

The offer of left-back Coentrao could well appease Rodgers, with the left-sided defensive role something of a problem area though the Liverpool may also be interested in the prospect of bringing in 21 year old Spanish international Isco, who has found his first team chances of late.