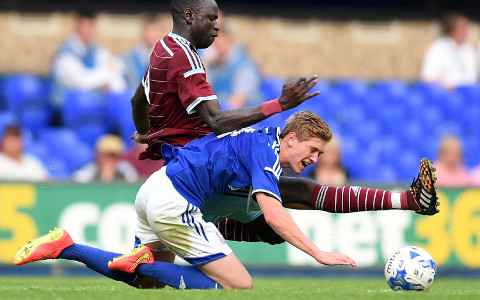 Arsenal are keen on luring teenage Ipswich Town midfielder Teddy Bishop to the Emirates Stadium in the January transfer window, report the Mirror, but the Gunners will have to act quickly if they are to secure the exciting 18 year-old with Premier League rivals Manchester United also monitoring Bishop’s situation.

Bishop broke into the Portman Road first team during the opening weeks of this season, signing a two-year contract extension following a series of eye catching displays, and has flourished as an important player in the Tractor Boys side that is threatening a return to the Premier League for the first time in a decade.

With this success has come unwanted interest with elsewhere, however, with Ipswich manager Mick McCarthy having admitted that Bishop is attracting as much interest from bigger clubs as prodigious right back Tyrone Mings, who is also believed to be a target for Premier League sides.

Bishop’s impressive performances in the second tier have meant that interest in the teenager has intensified of late, however, with the report suggesting that a bid will need to be submitted soon, from either of the interested parties, if they are to lay down their market in the battle for the Cambridge born prospect.