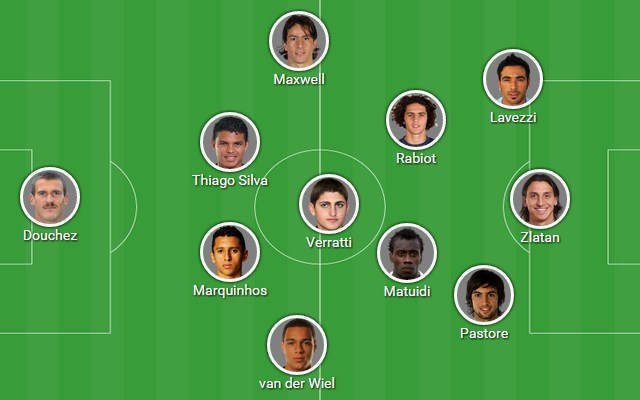 The PSG coach has made little secret of his frustration at his side’s intense fixture schedule as the season reaches its latter stages.

As such, expect a certain measure of rotation from Blanc in the Coupe de la Ligue final against the Corsicans.

Nicolas Douchez will play ahead of Salvatore Sirigu between the sticks, retaining his role as PSG’s keeper for the cups. The former Stade Rennais Number One may not be as accomplished as the Italian, but he demonstrated his qualities once again with some excellent stops against Saint-Etienne in midweek.

With David Luiz injured, expect Marquinhos to partner Thiago Silva in the heart of the defence.

Maxwell and Gregory van der Wiel will likely retain their spots at full-back, although if Serge Aurier is deemed fit enough to start, he may replace the latter.

In midfield, PSG are without Thiago Motta—another injury absentee—so Adrien Rabiot is likely to come into the team on the left of a three. The youngster impressed in defeat against Girondins de Bordeaux in the league recently and will be keen to make the most of this opportunity.

Marco Verratti and Blaise Matuidi ought to complete the pack.

Up front, Zlatan Ibrahimovic will likely be flanked by Ezequiel Lavezzi and Javier Pastore, with the latter given licence to drift inside and support the midfield. Expect Lavezzi and Pastore to switch flanks throughout the match.