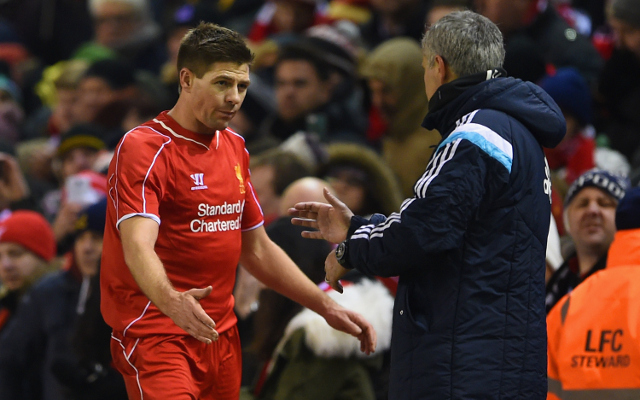 Chelsea boss Jose Mourinho has revealed he has tried to sign Liverpool legend Steven Gerrard for three different clubs during his managerial career: Inter Milan, Real Madrid, and Chelsea – but the Reds skipper refused to budge from Anfield.

The former England international will leave Merseyside at the end of the season for a new adventure in the MLS with LA Galaxy, and Mourinho has admitted that it is sad to see his ‘favourite enemy’ calling time on his Premier League journey.

The Blues boss made a personal tribute to the Reds captain, and revealed his failures to sign the Liverpool talisman.

“I am sad he [Steven Gerrard] is leaving the same as our Frank Lampard, but Frank is a Chelsea legend and it’s a different situation because Steven was always on the other side,” the Portuguese manager said, as quoted by the Daily Star.

He even admitted that he could still make another outrageous attempt to sign the midfielder, but concedes that Gerrard has no desire to play for a Liverpool rival.

“He can’t play against Liverpool. He’s done an amazing career with his people.

“He refused to play in other big clubs, other big leagues to play only for Liverpool and this is a feeling that stays together. Who knows I play against Steven as a Liverpool manager someday.”

Gerrard will be jetting off to LA in July – at the same time as Stamford Bridge legend Frank Lampard who’ll be joining New York City.

The 34-year-old is expected to make his first appearance in the MLS when Galaxy take on San Jose Earthquakes in the California Clasico on July 17, the Los Galacticos’s official website revealed.