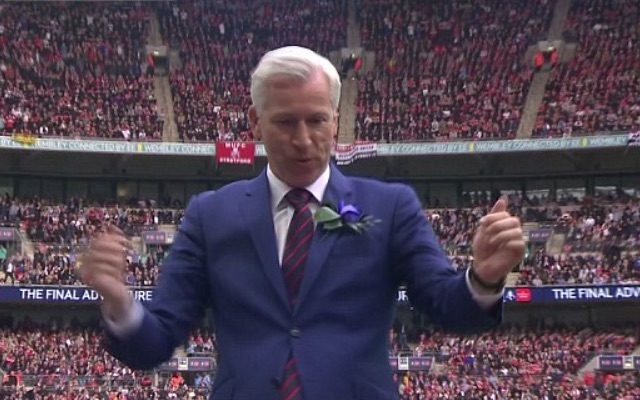 Crystal Palace finally got rid of their manager on Thursday after a stinking run of form, which has seen the Eagles lose eight of their last 10 games.

Pardew’s biggest achievement as Palace boss was undoubtably reaching last season’s FA Cup final. Unfortunately though, he soiled that achievement with this creepy dance at Wembley.

But it would seem that Palace’s owners don’t have a problem with managers dancing, because they are reportedly set to replace Pards with another boss famous for bustin’ moves.

According to the Daily Star, Sam Allardyce – who has managed Bolton, Newcastle, Blackburn, West Ham and Sunderland in the Premier League – will be offered the chance to sit in the Selhurst Park hot-seat.

Scroll to the bottom of this article to watch ex-England boss Allardyce losing himself on the dance-floor in Marbella.

Despite his fine record for saving crap teams from relegation, Allardyce is not the man every Palace fan desires.

Eagles supporter Conor O’Hara, who wrote to CaughtOffside after Pardew’s dismissal was made public, wants Palace to give former Manchester City chief Roberto Mancini another shot in England.

Conor said: “How the f**k did it take so long for Parish to sack Pardew? Five league wins in the whole of 2016. YES, FIVE. Two of them coming against Stoke ffs.

“He undoubtedly exceeded his sell by date and now we might possibly, hopefully, be able to beat the likes of Swansea, Hull and Burnley.

“With the squad we have, we should be challenging for a spot in Europe! Pardew slowly transformed us into the laughing stock of English football, placing us as the worst team in the top four English divisions for 2016. He may have got us to an F.A Cup final but realistically should have been sacked after that ridiculous dance. Bring on Roberto Mancini.”