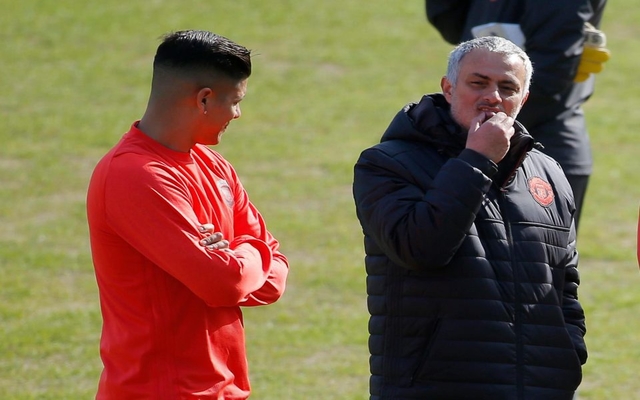 Things reportedly turned ugly in the tunnel after Man City’s win over Man Utd at Old Trafford on Sunday, with Jose Mourinho in the thick of it.

Goals from David Silva and Nicolas Otamendi secured all three points for Pep Guardiola’s side, as they extended their lead at the top of the Premier League table to 11 points.

That’s a commanding lead so early in the season, and unsurprisingly, particularly when considered alongside their form so far this year, it’s led to questions over whether or not the Premier League title race is already over.

Tensions were high for the Manchester derby given what’s at stake between the two clubs, but reports claimed it boiled over after the game with Mourinho unimpressed with the celebrations of the City players who weren’t too far away from the United dressing room.

According to The Daily Mail, with tempers flaring and alleged punches, bottles being thrown while Mourinho had milk thrown at him by a City player, six of his Man Utd players came to his defence.

It’s claimed that Marcos Rojo, Marcus Rashford, Antonio Valencia, Ander Herrera, Luke Shaw and Axel Tuanzebe rushed to the aid of their manager as things turned nasty, with the FA now confirming that they’re looking into the matter.

For now, it’s a controversial talking point. United would have been left furious over losing and the reaction of the City players. However, moving forward, it would be no surprise if Mourinho and his players used it as motivation to fire themselves up having seen their bitter rivals enjoy themselves at Old Trafford.

As for the individuals who helped to defend him, it looks as though Rojo is a warrior on and off the pitch as his no-nonsense style carries on away from football, while Luke Shaw’s lack of playing time clearly hasn’t affected his loyalty and desire to get in the thick of things to defend his boss.

Reminiscent of the talk between United and Arsenal all those years ago, this is a battle at Old Trafford that won’t be forgotten anytime soon…