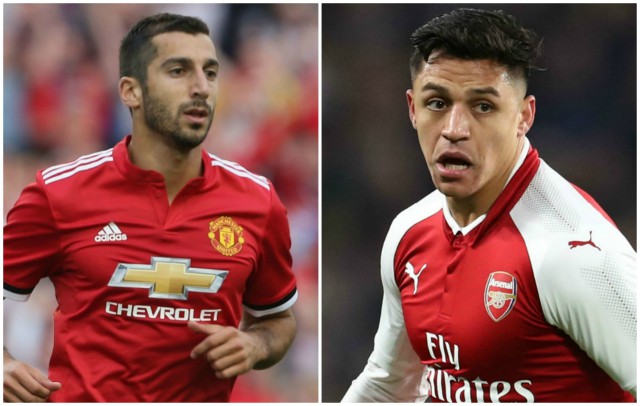 Man Utd playmaker Henrikh Mkhitaryan has reportedly agreed terms on a move to Arsenal, as the swap deal with Alexis Sanchez edges closer to completion.

Sanchez’s current contract with Arsenal expires at the end of the season, at which point the Gunners would have lost the Chilean international for nothing.

Instead, they’ve opted to make a deal this month to get something back for him, and as reported by BBC journalist David Ornstein in his tweet below, Mkhitaryan will join Arsenal in a swap deal for Sanchez with no additional fees.

Further, he adds that all the relevant documentation is sorted, and so now the only missing piece in this puzzle is the Armenian ace completing his medical before he is officially unveiled as an Arsenal player.

In addition, The Sun report that Sanchez may well have undergone his medical with United on Saturday night, after Arsene Wenger confirmed he had travelled to Manchester.

There is still a question mark over when Mkhitaryan will undergo his medical, but as seen in the photos below taken by LBC and Sky News’ Paul Smith, the 28-year-old is already reportedly at a hotel in central London as Smith doubles down on Ornstein’s claim that his medical is expected to take place in the next 48 hours.

Sanchez has fallen short of the standards he set for himself last season, as he’s gone from 30 goals and 19 assists in 51 appearances to just eight goals and four assists in 22 outings so far this year as question marks over his long-term future at Arsenal have seemingly had an effect.

Meanwhile, Mkhitaryan has had his struggles too having contributed only two goals and six assists in 22 appearances this season.

In turn, a swap arguably makes sense for both parties as Sanchez will add a cutting edge in the final third for the Red Devils to add to their dynamic attack, while the creative class and technical quality that Mkhitaryan possesses should make him a perfect fit for Wenger’s side.

EXCLUSIVE: Manchester United midfielder Henrikh Mkhitaryan agrees move to Arsenal in a deal that will see Gunners forward Alexis Sanchez go opposite way. It’s a straight swap, no money involved. Paperwork complete, Mkhitaryan will undergo a medical over the next 2 days #MUFC #AFC