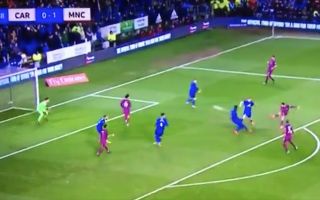 Manchester City fans were furious with referee Lee Mason after he disallowed Bernardo Silva’s goal against Cardiff City in the fourth round of the FA Cup.

Silva produced a stunning effort on the 24th minute from outside of the box which nestled into the near top corner of Neil Etheridge’s goal at the Cardiff end. However, Mason disallowed the goal to the bemusement of many fans watching.

It appears that a run across goal from Leroy Sane deemed to distract the Cardiff ‘keeper with Sane in an offside position.

Many however disagreed with the ref’s interpretation of the goal which can be seen below.

This goal for City has been ruled out for offside for interfering with the goalkeeper. The assistant and referee had 50% of the information each and then discussed.

Sane, was interfering with the GKs view as the shot was taken. Do you agree? #SRS #CARMCI pic.twitter.com/FkUDQrnUkE

The afternoon got even worse for referee Lee Mason after he allowed a challenge on Leroy Sane to not merit a red card despite the pictures showing the horrific nature of the tackle.

While many will now be calling for VAR the technology was on the receiving end of a flurry of abuse last night after it continued to disrupt Liverpool’s FA Cup loss to West Brom.

Disgusting, the ref has been genuinely awful

Good first half from Man City. Terrible from the ref disallowed goal which was a goal and a horror tackle that only got a yellow #CARMCI

Ref is a joke

So much confusion in this game now @LeroySane19 was not offside that side line ref is blind. @ManCity