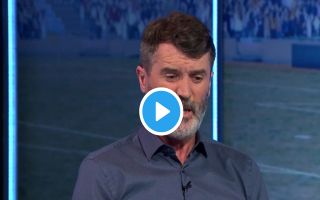 Man Utd looked largely uninspiring in their goalless draw with Sevilla in the Champions League, and Roy Keane has had his say on various matters.

Albeit the Red Devils will be confident of getting the job done in the second leg at Old Trafford, they only managed one shot on target in the game which will be a disappointment to many.

Keane though didn’t have much to complain about in terms of the result when speaking to ITV Sport in their highlights show, although he did still question the quality of the performance and expected a bit more from his former club.

However, despite splashing out on the likes of Paul Pogba, Romelu Lukaku and signing Alexis Sanchez, Nemanja Matic, Victor Lindelof and others, he believes that Man Utd are still rebuilding under Jose Mourinho.

“They are still rebuilding”

Watch all the @ChampionsLeague highlights on @ITV now! pic.twitter.com/FYhKboLuip

Given their Premier League position and the gap between them and leaders Man City, it’s fair to say that reinforcements will be needed this summer in order to make up that ground and to continue to compete for major honours.

Nevertheless, it still seems a little strange to suggest that almost five years on from Sir Alex Ferguson’s retirement, United are still a side rebuilding. While it was always going to be difficult to maintain the stunning level of consistency under the veteran boss, perhaps Keane is being too lenient on this one.

Meanwhile, he also took some of the heat off Pogba, as he aimed his criticism at some of his teammates instead.

The Frenchman has been struggling for form in recent weeks and was left on the bench against Sevilla. Keane had some advice for him but also demanded more from other key players around him.

“I look at Pogba off the field and he seems to have a big personality whether it be social media, the cars he drives, his haircut….he needs to bring all that on to the football pitch,” he is quoted as saying by the Irish Independent.

“But Man United’s problems are not just with Pogba. Lukaku has to do better, Sanchez has to do better, even though he is new to the club. If Lukaku wants to become one of the great strikers at Man United and you get chances like he did (against Sevilla) you have to score in these tight games.”

That is a little less difficult to agree with, as Lukaku in particular needs to be more prolific, especially at the highest level when he may only get one chance and he has to take the one we saw against Sevilla on Wednesday night.