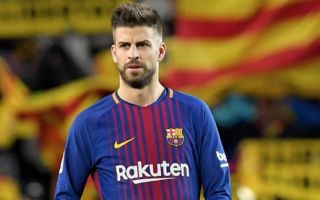 As the wait goes on to extend his contract, Barcelona defender Jordi Alba continues to be linked with an exit from the club and Gerard Pique is reportedly aware of the danger of losing him.

As noted by TeamTalk, the Spanish international is said to be a target for Man Utd, with his contract issues specifically mentioned in that report with his current deal running until 2020.

The Catalan giants seemingly can’t afford to lose him given the lack of quality and depth in that department of the squad, coupled with the fact that Alba has been instrumental to their recent success and has rediscovered his best form under coach Ernesto Valverde.

In turn, neither party will surely want to split and so there is likely to be a desire to reach a compromise, but according to Don Balon, Pique is said to be aware of the possible threat of losing Alba if the situation isn’t cleared up with United again mentioned in that report too.

It’s suggested that Alba would be open to a new challenge, and particularly if he doesn’t get the contract offer he is seeking, then perhaps next summer would be the ideal time to go looking for it.

Nevertheless, it doesn’t seem to make too much sense for either party. Losing Alba will leave Barcelona with a transfer headache in terms of trying to replace him with no immediate successor standing out in the current squad.

Further, with Luke Shaw impressing for club and country so far this season, a switch to Old Trafford for the Spaniard would perhaps push him down the pecking order at a time when he is seemingly winning Jose Mourinho over and proving his worth.

With that in mind, it remains to be seen if an exit materialises, but with time on their side, Barca won’t be rushing too much just yet to get a new deal over the line.