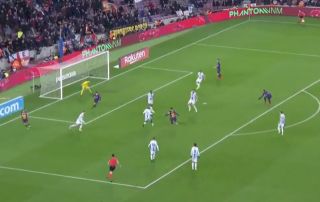 Lionel Messi put the icing on the cake for Barcelona this evening, as he scored a fine weak-footed goal to give the Blaugrana a 3-1 lead vs Leganes at the Nou Camp.

Having already been 2-1 up thanks to goals from Ousmane Dembele and Luis Suarez, Messi fired home in added time to wrap up the win for Barca.

The goal came after Messi gave the ball to Jordi Alba, who then played a one-two with the Argentine, who fired into the roof of the net with his right foot to give Barca a two-goal lead.

You can catch Messi’s goal below. The partnership he and Alba have is next level!