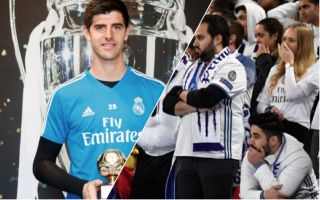 Thibaut Courtois was hammered by Real Madrid fans after the Los Blancos shot-stopper was handed the Goalkeeper of the Year 2018 award by the IFFHS.

The award, which was announced yesterday, saw the Belgian named ‘goalkeeper of the year’ by IFFHS, something which sees him join stars like Gianluigi Buffon and Iker Casillas on the list of ‘keepers to have won the award.

We can presume this was mainly due to the Real star’s performances for Belgium at the World Cup last summer, as Courtois has hardly been in the form of his life for Los Blancos since his move from Chelsea last year.

This decision to give Courtois this award didn’t go down too well with Real fans, who flocked to Twitter to hammer the Belgian, with some even claiming that he isn’t even the best goalkeeper at Real Madrid, let alone on the planet!

We’ve picked out a select few tweets from fans slating Courtois and the decision to hand the former Chelsea man this award.

Given how he’s performed in his Real career thus far, we can sort of see where they’re coming from…

He’s not even the best goalie on the team!

One of the worst keepers we have had in a really long time,such a waste of money.

Like how i don't understand just how? He has cost us so many important matches. Every real Madrid fans wants @NavasKeylor he is a true MADRIDISTA.

He doesn’t deserve this #HalaMadrid

Joke of the year