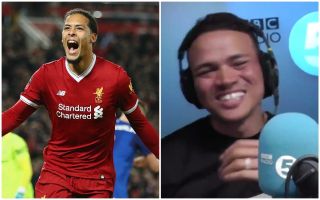 Liverpool defender Virgil van Dijk has rapidly established himself as the best in the Premier League, leaving strikers trying to find a weakness in his game.

From his aerial prowess to his pace and reading of the game, the Dutchman has been a fundamental part in why the Merseyside giants have the best defensive record in the league and continue to compete for the title.

SEE MORE: Luis Suarez reveals what Steven Gerrard said to him in 2013 to convince him to stay at Liverpool

In turn, it has led to many questioning whether or not there is a chink in his armour to expose for strikers to get the better of him in a duel.

As discussed by Jermaine Jenas, Glen Johnson and Steve Morison in the video below, it would appear as though the best advice they can give is to stay away from him.

Morison knows a thing or two about scoring goals given he’s bagged 248 in 654 games as a professional, and there is a level of seriousness and validity in what they’re saying.

Whether it’s trying to drag him out of position merely to allow others to have a big influence or trying to knock his confidence in possession to make him think twice and doubt himself, no player is perfect.

However, Van Dijk is certainly making it very, very difficult to find a weakness in his game currently, and that is having a big impact for Liverpool in their pursuit of major honours this season.

What is a striker thinking when he sees Virgil Van Dijk?

"STAY AWAY FROM HIM"

Steve Morison and Glen Johnson say that's the only thing you can do.