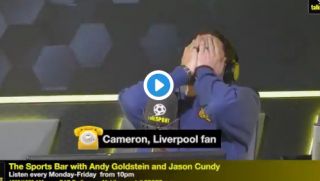 Liverpool fan Cameron had a bright idea last night that had talkSPORT hosts in hysterics in the video below.

Following Manchester City’s 1-0 win over Leicester at the Etihad Stadium, Pep Guardiola’s side are now back on top of the Premier League table and have their destiny in their own hands going into the final day of the season.

“I’m a Liverpool fan, we should get a trophy even for finishing second!” ?

“It doesn’t need to have a name, they should just give it to Liverpool.” ?

“Ferguson never got that many points.”#LFC fan tells @AndyGoldstein05 the club should get a trophy for second. pic.twitter.com/3Jmk17gmAv

Liverpool are just a point behind City on an incredible tally of 94 points – which would have been enough to win the title in every season of the Premier League apart from two.

The Reds now need to hope for a highly unlikely City slip-up away to Brighton on the final day of the season, but this apparent LFC fan Cameron above thinks the club deserve a trophy for 2nd place.

It’s hard to tell if he’s being genuine or if he’s perhaps an Everton fan on the wind-up, but he believes this incredible points haul deserves some kind of recognition, though he struggles to say what the trophy should be called or precisely what it would be for.

Done deal: Liverpool send defender back out on loan after recalling him from an unproductive spell in France
More Stories Jurgen Klopp Pep Guardiola