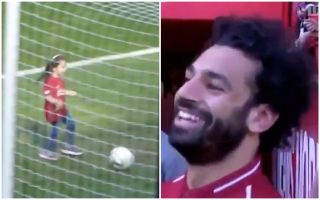 Mohamed Salah has enjoyed another impressive season this year, and he has undoubtedly established himself as a fans favourite with the Liverpool faithful.

Albeit they fell short for the Premier League title this season, it has been a very promising campaign for the Merseyside giants who still have the chance to win a major trophy with the Champions League final on June 1.

However, they bid farewell to their fans at Anfield on Sunday following the win over Wolves which brought the league campaign to an end, and as is tradition, the families of the Liverpool squad were out on the pitch after the full-time whistle.

In one of the cutest moments of them all though, Salah’s daughter made her way onto the pitch with a ball and after dribbling it all the way to the goal in front of the Kop, she passed it into the back of the net to earn a huge ovation from the supporters who had stayed behind.

As seen in the video below, Salah’s reaction says it all as he couldn’t help but grin from ear to ear throughout the entire thing, and punched the air as the ball hit the back of the net.

It’s a wonderful moment to watch, and even despite the disappointment of not winning the Premier League title at the weekend, the atmosphere at Anfield says it all about where the club is at currently and the positivity surrounding them.

Mohamed Salah's daughter scoring this goal is the cutest thing you'd see today. More power to dads who encourage their daughters rather than suppressing them. pic.twitter.com/bU6YMJtisO

Listen to the crowd!!!? pic.twitter.com/kfgOeuIZjr