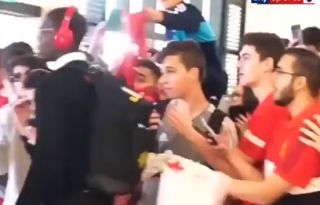 Paul Pogba had time to greet Manchester United fans and sign autographs as he and the team arrived in Perth for the start of their pre-season tour.

The France international is normally a pretty cheerful and bubbly character in situations like this, but today looked a bit glum and out of it.

Of course, he may just be jet-lagged after a long flight, but the Times have reported on interest in Pogba from Juventus this summer, with his agent Mino Raiola quoted in the piece as saying he and the player are working on getting out of Old Trafford.

That being the case, it’s understandable that the 26-year-old might be a bit distracted at the moment, and he kind of looked it…